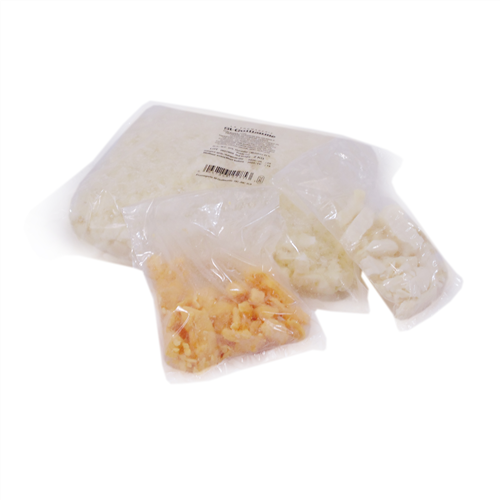 Curds are the solid dairy product obtained by coagulating (curdling) milk. The process of making most cheeses begins with the milk curds, when they are pressed into a mould or form. Before being pressed: curd may be salted, cut into smaller pieces, washed, or stretched—all steps which will alter the eventual texture and flavour of the final product. Oftentimes the whey (the liquid part of the milk which remains after the curdling step) is drained off, but in some cases all or some of it may be left in with the curd. A small number of cheeses are made solely from the whey. Curd is also enjoyed as a snack it its own right, and of course are the famous key ingredient to the French-Canadian dish poutine. Fresh curds are beloved for their uniquely “squeaky” texture; pleasantly springy, chewy mouthfeel; and mild, salty, fresh flavour. We carry both white and coloured curd—though it is worth noting that the difference is purely an aesthetic one. Although one or the other variety may sometimes be sold as “mozzarella curd”, “gouda curd”, “cheddar curd” etc. in reference to their respectively different colours—it is only in the additional steps of ripening, cooking, or other processing that curds beging to develop the unique characteristics which would differentiate those cheeses. In this way we can think of curd, rather than as a young or unripened version of any given cheese, as a unique dairy product in its own right. Much in the same way that milk, although it could be coagulated and used to make curd, does not actually taste like or resemble curd—curds could be made into cheese, but nevertheless have their own distinct qualities and flavour if enjoyed as is.