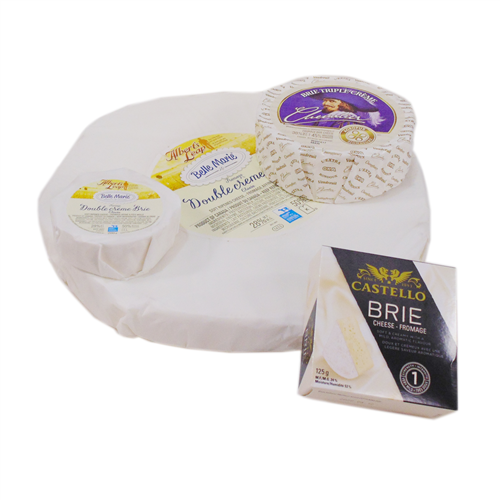 Brie cheese, named for the historic region of France from which it originated, is surely one of the best know of all cheeses worldwide. Famous for its subtle, slightly mushroomy aroma, decadent creamy consistency, and rich, full-flavoured taste—Brie, alongside its comparatively riper sibling cheese, Camembert—is iconic, representative of an entire style of cheesemaking, and of French cheeses altogether. Although the original incarnation of Brie was a French innovation, and traditionally made only from Cow’s milk—various interpretations of this famous cheese are now made throughout the world. Most styles are made still, from Cow’s milk, but others are made with Goat’s milk or, more rarely, even Sheep’s. A classic French-style brie is soft and buttery, slightly oozy at room temperature, with a a white to pale golden-yellow interior, depending on the type of milk used. Oftentimes, the flesh has minute holes—not unlike those present in a Swiss Emmenthal, albeit much smaller. The crust of a Brie is a faint grey-to-brownish tinge, which peeks out from beneath a fluffy, white, penicillin mould rind. Brie is mild, only delicately aromatic—sometimes with slight hints of wild mushrooms, or of vanilla. The white rind or “bloom” may be fluffy and fairly thick, or lighter and more depleted. Either way: it is generally consumed, and has a delicate, but still more earthy, character than the interior—understated, but ranging from fungal, to slightly sour.