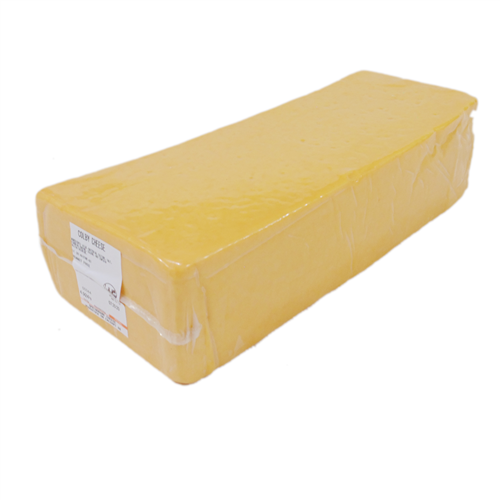 Country of Origin: Canada Milk-type: Pasteurized Cow’s milk Originally developed in the 1880s by a resident of the eponymous town of Colby, Wisconsin—Colby cheese is one of a handful of American cheeses which are more or less modelled upon Cheddar, the manufacture of which was already well established in the United States, especially amongst the many European immigrants who settled throughout the Midwest. Although resembling a mild Cheddar in both appearance and flavour: Colby cheese does not undergo a cheddaring process, instead being made using a washed-curd method, which reduces the overall acidity of the curd, resulting in a characteristically mild and smooth flavour. For this reason, Colby is also less crumbly than Cheddar cheese, softer, and more moist. Colby cheese is now widely produced throughout North America. It has a slightly creamy mouthfeel and a very even texture; Colby is not aged and has a very mellow taste, neither too salty nor especially sharp, and with only a very subtle nutty-sweet aspect. Because of its very easy going flavour, Colby is a very popular table cheese, and often used for grating or cubing over salads, or melting in a grilled cheese sandwich. Colby is often popular with children, because of its inoffensive and simple flavour, and as such is an excellent and healthsome choice for school lunches, whether sliced in a sandwhich or enjoyed with crackers.